According to a pan-Arab Lebanese TV Channel (Al-Mayadeen), an Ethiopian plane has uploaded at Malta 15 chests of false money to be delivered to Venezuela.

The Venezuelan economy has collapsed. Elliot Abrams thinks this is due to the communist government being unfit managers while the Bolivarian government of Nicolas Maduro thinks it’s the result of a US sabotage.

Whilst sabotaging the Venezuelan economy, the United States has just delivered humanitarian aid for the victims of this sabotage to the border that Venezuela and Colombia share. Convinced that this stock includes subversive material, the Venezuelan government is refusing to deliver this aid (but it is accepting aid from other countries). Clearly this stock is barely significant, since the total US aid following the crisis represents only 6% of the daily aid distributed by the Venezuelan authorities. 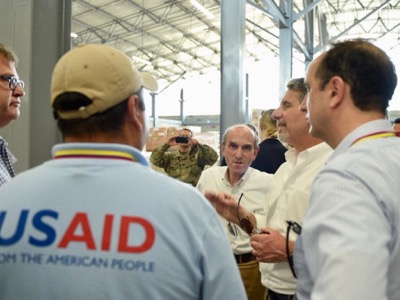 During the war against Syria, both Saudi Arabia and Qatar printed false money to bring the Syrian economy into chaos. However at the time, both monarchies were competing with each other; they had not come to a market sharing agreement. Further, at the same time they were paying all their mercenaries in dollars. For the mercenaries to be on the spot men, they had to change their US dollar pay into Syrian pounds. Finally, Syria has printed new notes in Russia.